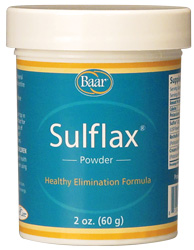 The formula name, Sulflax, was created by combining the name of one of its key ingredients and its function. It contains the prefix “sulf” (sulfur) and “lax” (laxative), its remedial purpose.

Enhancing better eliminations is a major component for achieving better health – part of Dr. Harold J. Reilly’s C.A.R.E. formula: Circulation, Assimilation, Relaxation, Elimination. While some laxatives are considered too harsh for some systems, he did offer other means of assisting and stimulating eliminations. This particular formula is one such remedy, and it is recommended to individuals in the Cayce readings from the ages of 21 months to 74 years.

Taking Sulflax® can extend from once per day for 2 to 3 days, up to as long as 2 weeks; the suggested use is in the middle range of this spread–from 3 to 7 days. Some are advised to take Sulflax in a series, such as 3 to 5 days, rest 5 days, then repeat. With just a few exceptions, it is to be taken daily in the morning before breakfast; for some every other day is suitable, and for a few twice a day–morning and evening–is recommended. It can be taken either dry or mixed in a glass of water, while a few mention warm or hot water. Some customers state that they added it to syrup or honey.

As to the purpose of the remedy, it is a purifier and cleanser for the body–for the circulatory and digestive systems as well as a stimulant for the elimination system. In its role as a mild laxative, it not only will increase the eliminations and set up the better assimilating forces for the body, but it will also cleanse and purify the alimentary canal (the passageway extending from the mouth to the anus through which food is processed and digested).

Poor eliminations may be the indirect or direct cause of various physical ailments for which Dr. Reilly’s patients asked for help. It is always advisable to seek advice from a health professional when beginning a new regimen of treatment.

It’s important to keep in mind that very rarely is only one item suggested for a particular health problem. Other remedies, such as osteopathic adjustments, the three-day apple diet, massages, steams, or colonics, are also recommended either during or after the taking of Sulflax. Each remedy has its own function to aid and assist the body in coming to a better balanced condition.

I grew up dealing with allergies to ragweed and have studied the Ragweed plant for many years, including the optimum growing conditions and optimum area to grow a consistent crop.  I am fascinated by this lowly plant and the benefits we can obtain from its proper application.  In my research I have determined there are a few ways to acquire the benefits this plant’s constituents have to offer.  One is through a tincture.  Another is through a tea (a different milder species) and the other is via a capsule.  It is the Ragweed capsule that we are excited to introduce to you today. 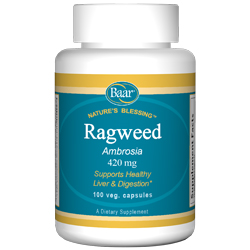 There is no other product like this in the world.

There is no other product like this in the world.  We are able now to capsule fresh handpicked young Ragweed Ambrosia Leaves.  Each vegetable capsule contains 420 mg of these young fresh leaves from the Ragweed plant.  Locally grown and locally harvested.  The tender leaves of the Ragweed plant are handpicked and then they are carefully dried in our special facility.  Most importantly, we harvest our Ragweed at a particular time of the year to be sure the plant has not grown out of our quality specifications.  After we inspect the plants and judge their quality, we harvest and dry the tender leaves.  Because these procedures are meticulous, and because of the current size of our crop, we have a limited supply available.  Don’t miss out.

In Greek mythology ambrosia is considered the food of the Gods, and whether they are referring to Ragweed or not, we are discovering more benefits from this plant every year.  For example, Edgar Cayce (who often referred to ragweed as ambrosia) mentions using it for hay fever, reactions during allergy season, as a liver flush and much more.  He states it is excellent for the liver and good for everyone: “This is for anyone! This is the BEST of the vegetable compounds for activities of the liver.” He goes on to state that it “Maintains equilibrium in the pancreas, spleen, liver and hepatic circulation and digestive system as a whole.” He also calls it a non-habit forming mild laxative that will aid in both assimilations and eliminations.

We are proud to introduce to you this remarkable new product. 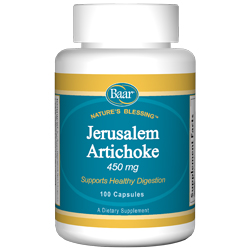 Native to central North America, Jerusalem Artichokes, often called by the more modern name “sunchokes,” can be eaten much like a potato. This vegetable is not truly an artichoke but a variety of sunflower with a lumpy, brown-skinned tuber that often resembles a Ginger root. The white flesh of this vegetable is nutty, sweet and crunchy and is a good source of iron. Along with supplying iron, it also hosts a large amount of health benefits.

The Jerusalem Artichoke is one of the finest sources of dietary fibers. Each Jerusalem Artichoke contains large amounts of inulin, a zero calorie and inert carbohydrate, which does not undergo metabolism inside the human body. Its high amount of inulin makes it an ideal sweetener for diabetics. Inulin fights harmful bacteria inside the gastrointestinal tract making Jerusalem artichokes a fantastic prebiotic. The soluble and insoluble fibers in this tuber bind to toxic compounds in the gut and alleviate constipation by normalizing bowel movements.

Carbohydrates in foods break down into simple sugars quickly and cause blood glucose levels to spike and drop sharply. Fluctuating blood glucose levels may significantly increase the risk of fatigue, heart disease, moodiness, immune deficiencies, and diabetes. The Jerusalem Artichoke is considered a low GI (glycemic index) food and provides a slow and stable rise and fall in blood glucose levels.

The tuber contains anti-oxidant vitamins like vitamin C, A, and E. The combination of the vitamins, minerals, electrolytes and flavonoid compounds, eliminate harmful free radicals in the body thereby reducing inflammation and strengthening the immune system.

Make the Jerusalem Artichoke part of your healthy diet!

Herbal extracts have been traditionally used to maintain, restore and improve health. But which is the best way to experience the medicinal benefits of an herb – capsules, teas or liquid extracts? Capsules may be convenient and teas may be easy to make but a liquid herbal extract offers benefits that these do not.

Tablets and capsules lose the potency of many of their active ingredients both in production and storage. Herbal tablets are prepared with fillers, binders and other materials necessary to compress the ground herbs into a tablet form. Herbal capsules tend to be better than tablets because they dissolve more easily in the stomach and do not contain the extra binding materials, however, if the body is not digesting and assimilating well, the potential therapeutic benefits of an herbal extract are diminished. Herbs in a capsule and tablet form also loose potency faster as they are exposed to oxygen.

Liquid Herbal Extracts tend to be more potent and offer a greater concentration of the plant’s medicinal properties. Their absorption occurs more quickly allowing the herbal properties to enter the bloodstream with minimal digestive effort.

Some herbs will not release their innate healing properties without a strong solvent such as Alcohol to extract its medicinal benefits. Alcohol has proven to work better than water for the extraction process of the plant’s active herbal constituents (parts of the plant that have an action on the body). It also protects the extract from bacterial growth, enhances the potency of the herb, preserves without refrigeration, extends shelf-life and brings out the aroma and flavor of the herbs.

Most liquid herbal extracts can have a shelf life of up to 2 to 4 years. Store the liquid extract in a cool, dark place and shake well before each use. Always mix the dose in water, juice or tea to avoid irritating the mouth. Sip slowly and savor the flavor and aroma – an integral part of the plant’s therapeutic benefits. And don’t forget to check with your doctor – some herbs are contra-indicated when taking prescription drugs.

The Lymphatic System consists of a network of vessels, nodes, lymph fluid and organs that helps control fluid balance, rid our bodies of wastes, filter toxins, as well as transport and absorb fats and fat-soluble vitamins. Your lymphatic system is a vital part of your immune system. It produces and distributes critical disease-fighting cells called lymphocytes and macrophages. If your lymphatic circulation slows or stagnates, toxins begin to accumulate and immune cells cannot travel efficiently to the areas of the body where they are needed, weakening the body’s ability to fight infection, inflammation and disease. The lymphatic system isn’t lucky enough to have a powerful organ like the heart to keep fluid flowing. It must rely on our muscle movements as its pump. The Lymphatic system is also unique in that lymph fluid flows in only 1 direction – towards the heart.

By supporting your lymphatic system, you boost your immune system, remove toxins, transport vital nutrients and help maintain a healthy body. Here are 10 ways to improve your Lymphatic Health!

“Mornings upon arising take for 2 minutes to exercise in this manner – where the body, standing with the feet flat on the floor, gently rises to the toes at the same time bringing the arms high above the head. Then bring these as far back as possible or practical, swinging both arms back. Then gradually bring them towards the front, then let down. Breathe IN as the body rises and OUT as the body brings the hands to the front, slowly. Do this three or four times each morning…”

Empower your body, mind and spirit!

*These statements have not been evaluated by the FDA. Products are not intended to diagnose, treat, cure or prevent any disease.

Products and information provided on this site have not been evaluated by the FDA, and are not intended to diagnose, treat, cure or prevent any disease. Please consult a qualified health care professional for assistance. Results provided by customers' experience are not always typical and individual results may vary.

* Free shipping offer valid only for internet orders carrying a subtotal of $99.95 or more shipping to the Contiguous US via Ground service. Shipments to AK, HI, PR, GU, VI, APO and FPO do not qualify for free shipping. Must ship to street addresses. Offer not valid on call-in or wholesale program orders, or orders with a weight of more than 50 lbs.